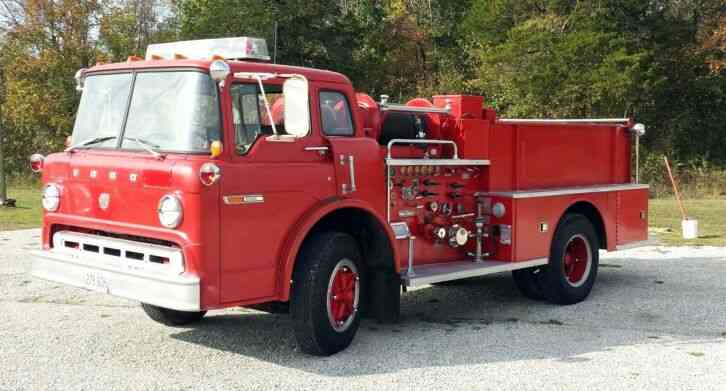 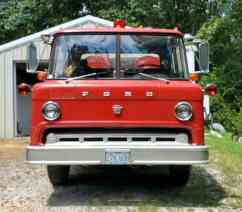 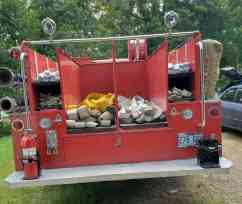 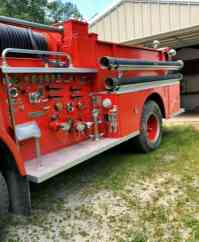 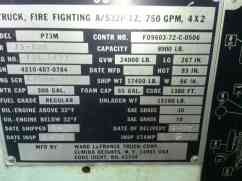 Up for auction or “Buy It Now” is a 1973 Ward LaFrance Ford C750 Fire Truck (with many extras). This vehicle first saw service at Hamilton Air Force Base in California, and saw its last tour of military duty at Richards-Gebaur in the Kansas City area. After that it went to a volunteer Fire Department (don’t know where) and eventually ended up on a used car lot where a friend of mine bought it with intentions of restoring it. He had a major stroke that ended up taking his life and I purchased it from his widow in 2014, and began the job of restoring it when I had time. One of the pictures shows it with a Twinsonic Light bar. This was changed out with a North American 2-lamp Beacon. The Twinsonic IS NOT included!! Another picture shows it when it was “in service” at Hamilton AFB. We all know what kind of year this has been for all of us, and as a result I find it necessary to sell her to help cover some of my own medical expenses incurred over the past year (this getting older stuff stinks). Buyer is responsible for shipping/pick-up. Payment to be in the form of personal check, certified check from a US bank (must clear before the vehicle is released), or cash at time of pick up. A $500.00 deposit is due within 24 hours of the end of the auction via PayPal. Along with everything listed below, the vehicle does come with a clear title. I would strongly recommend having the rig transported via trailer just due to the fact that just as soon as I said that it would make a trip just fine, it wouldn’t. No, the truck is not COMPLETLY restored, and there is still work to be done on it to get to that point. Vehicle is sold “As Is, Where Is” with no warranty. What you see is what you get (less the Twinsonic). If you have any questions, feel free to let me know, and I will get back to you as soon as possible. Thanks for looking, and have a great week.Work that has been done to the 1973 Ford Ward-LaFrance Fire Truck: New North American 2-Lamp Beacon.(New)Spotlights (handles) replaced or repaired-both work.Alternating flasher replaced.Federal PA-15 Siren (this is what was originally on the truck).TS-100 Siren Speaker (currently not mounted).High band radio antenna (New).Motorola radio control head in cab. This has been wired to appear that it works and transmits. The power light comes on, and the transmit light comes on when the mic is keyed.Interior grab handle on passenger side for easier access.Chrome lug nut covers added to all lug nuts.New hand throttle (high dollar) on the pump panel.Spanner wrench’s in all brackets.Hydrant wrench.Replaced shoreline connection.Replaced heater & defroster duct work.Added 12V fan to cab.Battery.Added heavy duty dual battery charger/conditioner. Rebuilt all the hose beds.Back up alarm added.NEW extension ladder.Pike pole and brackets.2 sections of hard suction, strainer and trays.300 plus feet of 1.5 inch fire hose.200 feet of 2.5 inch fire hose.200 feet (I think) of booster line.2.5 inch nozzle.2-nozzles for 1.5 inch.2-nozzles for booster lines.2-rear Unity Spotlights.2-fire axes2-fire extinguisher brackets with 1-10# ABC and 1-20# Co2 fire extinguishers.1-MSA SCBA Air Pack.Misc hose adaptors and couplings. 1-4 inch to double 2.5 inch hose adaptor on pump side intake.Ward-LaFrance body completely repainted-Ford portion refurbished.All compartment lights work.Pump panel lights repaired and work-switch replaced.Side lights (by pump panel and opposite side) replaced.I had a major tune-up done on the truck about 2 years ago, and have not really run it out after that except to start it and let it run. Recently I did get it out to make sure transmission/brakes were in order and checked out fine. Tires show good tread, but I do not know how old they are. Mileage shows 16,713 miles which is believed to be original based on its assignments through the years (Easy duty).The rig does need a headliner. Didn’t have one when I got it, and it was not a priority. I have not tried to “pump” the rig. The tank does not leak, but there were some what seemed to be minor leaks when I pulled the “tank to pump” lever, but not around the pump packing itself. 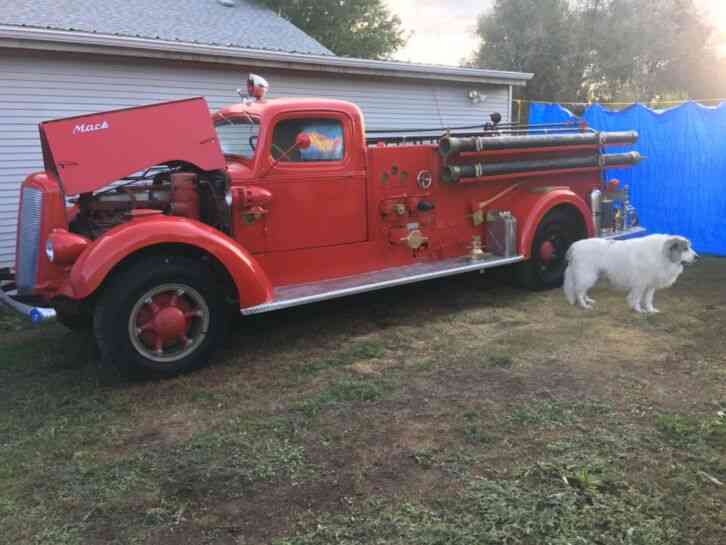 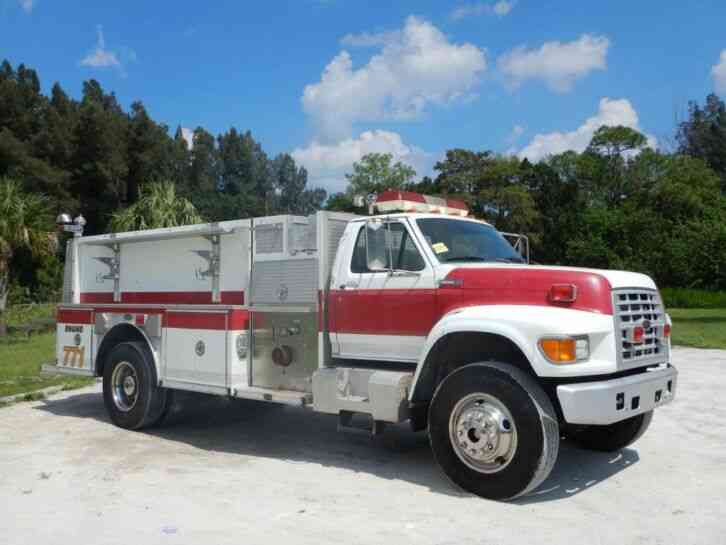 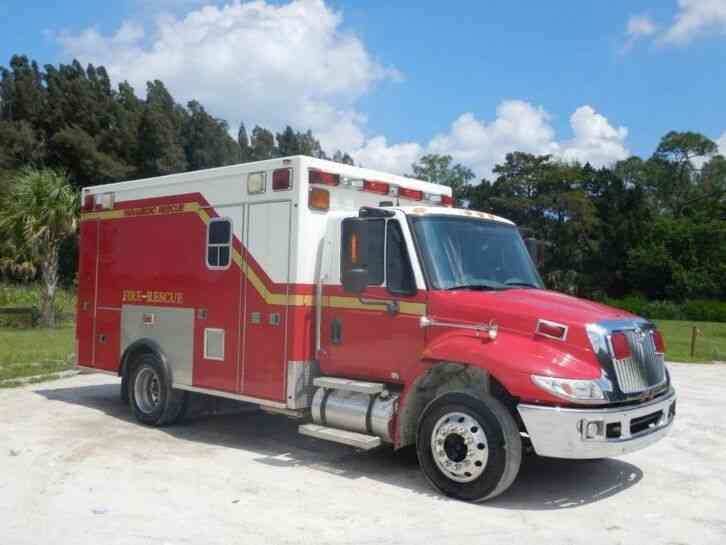 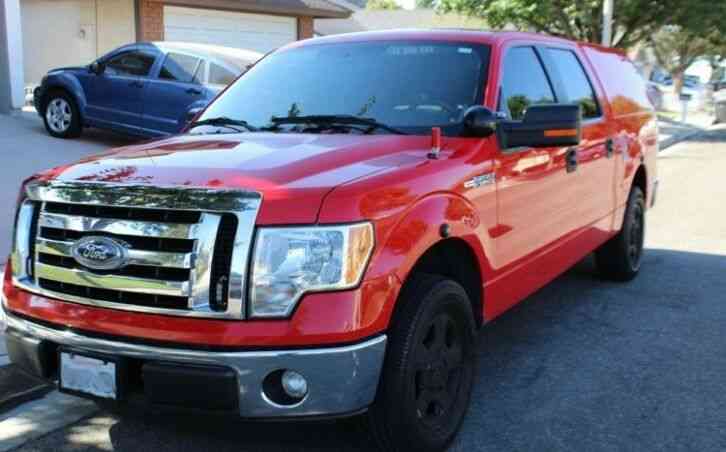